So its the day after G1 Round 2 and still unsure if my motor is ok from the when oil pressure gauge let go yesterday. Andy from ASR took the car that morning and put a mechanical gauge on the car. Cranked it over and deemed it fit for thrashing!!!! Its fair to say I was relieved at this point in time haha, No way could I put together a new motor in time for WTAC let alone pay for one.

It came down to me being extremely lucky that I always look at my gauges and make sure things are ok. This time it saved my motor and if I didn’t see the oil pressure drop when it did I wouldn’t have even been able to think about WTAC.

Now this was sorted thanks to Andy I was now on a mission to get to Sydney a week earlier then needed. Reason being was Advan Australia had a display setup which  my car was going to be on. Not only that but I would be there with the car for all 4 days selling discounted tickets for WTAC 😉
Good mate Jason ‘BONES’ Baker took on the mission to passenger along for the 16 hour trek to Sydney and put up with me for the next 2 weeks hahaa… Not only did he help pit crew but he also worked like a trooper with an insane amount of hours put in. Thanks heaps bro!!
So we hit the road at around 1AM on the Wednesday morning hoping for a nice arrival later in the afternoon. 16 hours is a bloody long way and when you passenger doesn’t have a licence it makes things harder too 😛 haha 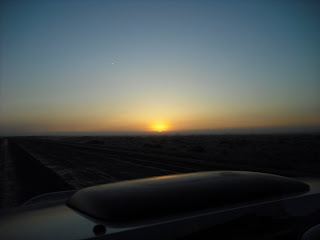 After 5 hours driving we hit the rise of the sun!!! this was going to be the hardest part for me as I love sleeping hahaha. Iced roads and next to zero vision was proving hard to cope with.

Massive thanks to Bluey for the lend of the tow vehicle. The car was awesome and did the job perfectly, tank was small so we had a few stops on the way for fuel, I’m fair hopeless when I’m tired 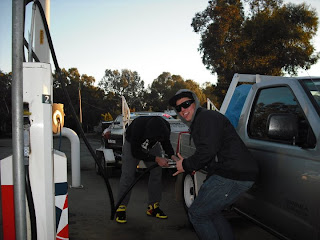 Here is a pic of the whole setup thanks to Bluey!! 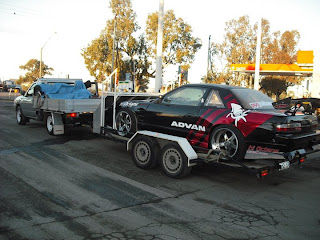 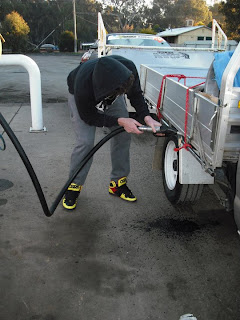 haha anyway, We kept on trekking across Australia to get to Sydney by that Afternoon. Most of the drive was boring but when we seen the wind farm we got a little excited lol. 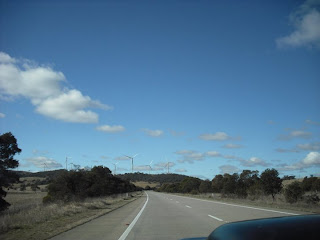 They are bloody huge!!!

It honestly felt like we drove for a week but we finally made it too Hi Octane Racing which is in the thick of Sydney. We meet up with Ian, Kyle and Nath from Hi Octane and after a quick hello is was back to business. We had to have the display ready in the mall that night for the morning. So we dropped the car off at Hi octane and headed down to catch up with the Advan Australia crew and get the display setup.

Once we had it all ready for the cars to just roll in we then got the chance to get some sleep. With around 4 or 5 hours sleep it was time to be back up again to go pick the car up and get it down to the mall in time for the opening. 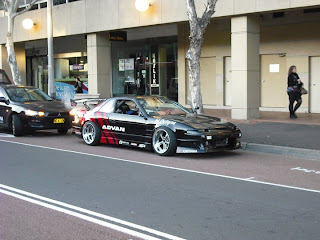 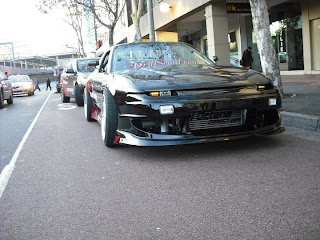 unloaded and chilling in the street on Paramatta hahaaa 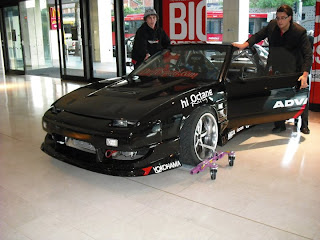 The store was very worried about the floors so we had to use go-jacks to push the car in the shop and to its position. 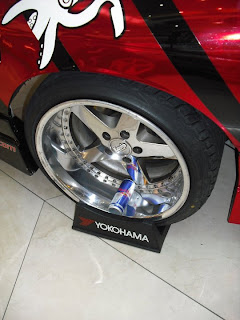 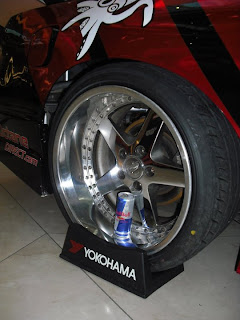 Bones and myself got bored while setting up!!! 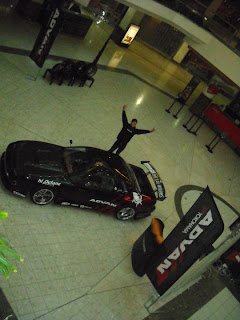 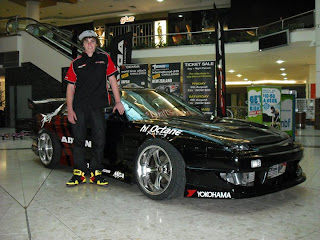 It was fairly surreal to have my car in a major shopping mall and I was looking forward to seeing what people through of it. 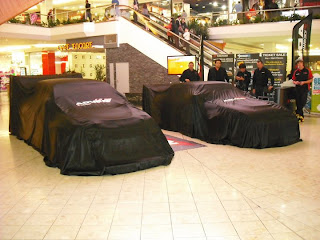 All covered up ready for the unveiling on the Thursday night

The Thursday night was the launch of WTAC and a huge amount of Media came along to shoot the cars on display. 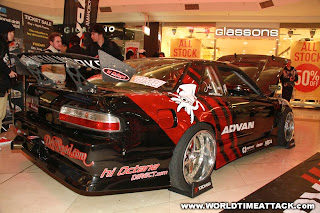 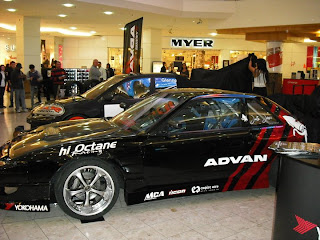 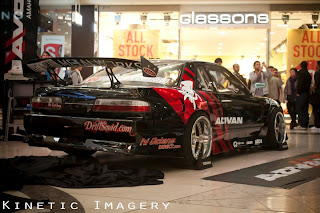 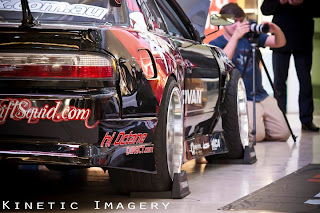 The cars where on display from the Thursday through till the Sunday. Bones and I spent the whole 4 days speaking to people and making the event aware to the public. It was long days but at the same time fairly funny. Bones even found a good mate which I think he is still in contact with hahaha

Here is a video from Advan Australia on the opening launch, its damn cool!! Check it out

We got the cars out the night before and packed up the whole display, it was now time for Bones and myself to get stuck into getting the car ready. With my dog box being serviced I was only able to pick it up on my way to Sydney. So while we had a spare morning Bones and myself took the car to Hi Octane Racing and quickly changed the gearboxes over. 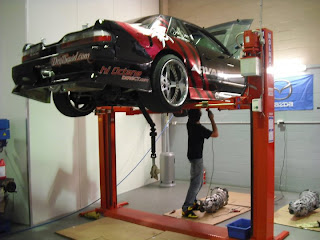 Out with the Standard and in with the Goodness of a PPG Dog box!!! 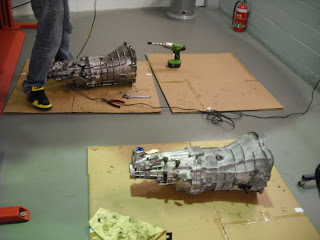 While we had to car on the hoist we went over it good and proper.

Once we had that sorted it was now time to get back to helping Hi Octane and Advan with WTAC. All the international cars had arrived into Sydney but needed unpacking. Now this sounds like an easy job right??? 6 to 7 containers and around 13 or 14 cars…. ahhhhhh yeah might be a little hard lol. Bones and I had the job of unloading them haha…. 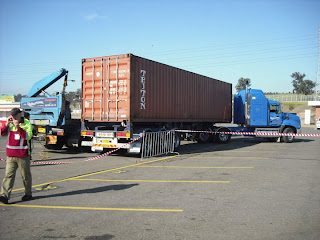 Here is the first one!!! too easy 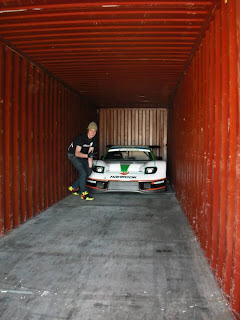 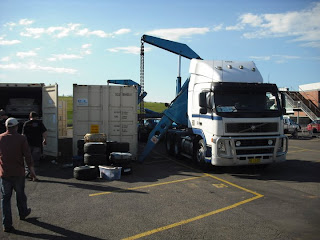 Oh so as we open the door to the fully packed Kiwi container, another rocks up LOL! “Yo Bones I think we are here all night bro” haha
So all up we had 7 odd containers, to tell you the truth the amount of work it was it was so crazy opening such awesome cars and seeing them in the flesh. Trying so hard not to touch anything and spending stupid amounts of time making sure everything is clear for when we push them out. Was awesome fun and honestly cant wait to do it all over again next year 😉

We finished late late that night and the man (Ian Baker) treated Bones and myself to an awesome meal and beers down the road at some farm restaurant place. Had animals running around all over the place haha

WEDNESDAY 3rd August 2011,
Its fair to say we have done a fair bit of work up until now but we haven’t even started with the big event. We ran around getting stuff for Ian like all the Japan/US and Aussie teams fuel. Total of like 20x44gallon drums of E85 haha.
We also had our mates from Kiwi land arriving today, was fair pumped to introduce them to Bones as he hadn’t had the pleasure of meeting the crazy crew yet. Once the day of running around was over and my car was at Eastern creek I could head back to the Hotel and catch up with the Kiwi crew and all the boys from SA that came up. 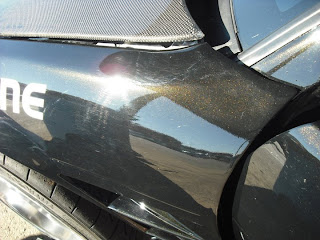 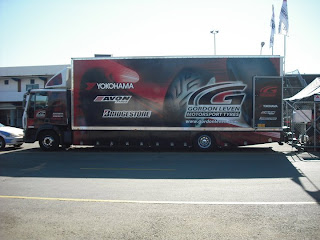 Yokohama Rig!!!! The other one with Mark Berry’s R34 on it is so damn awesome… Who would like to see a Yokohama Rig with the Squid on it??? haha